Symbolism of Shuttercuts: The Pineapple as an Icon

The Pineapple as an Icon 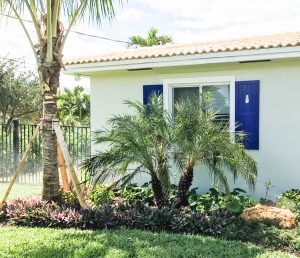 We ship a lot of custom shutters with festive-looking pineapple cutouts to warm climates, though they are can be found all across the country. Something about this prickly, sweet, and exotic fruit has caught our attention and made its place in design. But why exactly is the pineapple such a popular choice?

This tangy, recognizable fruit conjures up an abundance of associations. Think for a moment. Did simply reading the word bring up some images in your mind? A cool, slushy pina colada? Palm fronds swaying in the breeze on a tropical beach? Or perhaps you were reminded of its symbolic representation of hospitality…

Pineapples are favored as an emblem for many resorts, hotels, and other businesses in the hospitality industry. Ever since the pineapple’s discovery during colonial times, it has stood out among its fellow fruits. The pineapple’s rise to prominence is woven through its history of remarkable allure, scarcity, and capacity to prove a host’s status.

It all began with Christopher Columbus’ expedition to the Caribbean in the autumn of 1493. His crew descended upon an abandoned island village. While exploring the settlement’s pots and pans, they found some very unusual food choices: the tribe seemed to have a taste for cannibalism...but also, for pineapples.

Leaving the unsettling portion of the meal behind, the seafarers helped themselves to the assorted fruits and vegetables that were gathered around extinguished cook fires. Their favorite among them was a fruit that looked a bit like a pine cone.

The pineapple was a particularly exciting discovery in the context of Renaissance-era Europe. Fresh fruit and sweets of any kind were a rarity. The pineapple’s exotic, candy-like flavor was instantly coveted. Horticulturalists set themselves to the task of developing a method to grow the prickly-looking fruit. Kings delegated this mission to royal gardeners all throughout Europe, competing amongst themselves to create conditions in which the pineapple could grow. It was over a century before Europeans managed to find a way to grow the sought-after fruit. Such was its level of value and fame that there is even a portrait of King Charles II receiving one as a royal gift.

Pineapple Craze in the Colonies

Europe’s frenzy over this exotic new delicacy was mirrored in the New World, too. But the colonists developed their own form of cultural fascination with the pineapple. There was a growing desire not only to taste the delicious fruit, but to display it, as well. In fact, it would become something of a celebrity inclusion at the center of many gatherings. 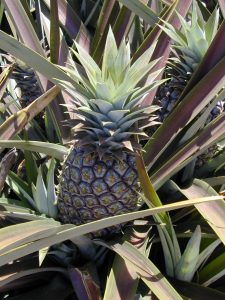 Colonial settlements had few venues for entertainment. People spent a good deal of time in the home, where the majority of community activity took place. The culture naturally emphasized concepts of hospitality and warmth, as colonists invited one another into their homes for get-togethers to enjoy extravagant meals and pleasant conversation.

The main attraction of every gathering was an elaborate table display. Socializing focused around these intricate arrangements. Platforms and pedestals around the table were decorated with lavish goodies, garlands of greenery, fragrant flowers, delicate knick-knacks, and glittering spun sugar. The lady of the household used these table displays as a form of self-expression and also as a way to show her status. They were, in many senses, a statement piece.

And what better way to make a statement than with a pineapple? After all, pineapples were all the rage.They were so difficult to obtain due to the long voyage it took to ship them that confectioners would rent them out to be used as centerpieces, and then sold later to a richer family who could afford to actually consume them!

So, of course, to be presented with this hard-to-procure treat, either as decoration or for the high honor of consuming it, meant you were most certainly a VIP. Henceforth, its symbolic ties to hospitalitybecame solidified as serving dishes and household items were decorated with pineapple designs. It became a central feature in many architectural details and continues to inspire interior design today.

Want to infuse your exterior decor with some pineapple hospitality? Get in touch with a Timberlane Expert today to design your own custom shutters, or check out our custom options in ShutterBuilder!

The Importance of Shutter Capping for Wood Shutters

What Are the Different Types of Garage Doors?